Waitomo Glowworm Cave – picture from waitomocaves.com (as good as iPhone photo quality is these days, my camera could never have captured the glowworms the way this photo does!)

Like millions of little blue stars in the sky, the roof above us was alight with tiny creatures known as “glowworms.” They filled the cavernous space with their soft light, reflecting gently off the water below as the boat cut silently through the stillness. In wonderment we gazed around us. 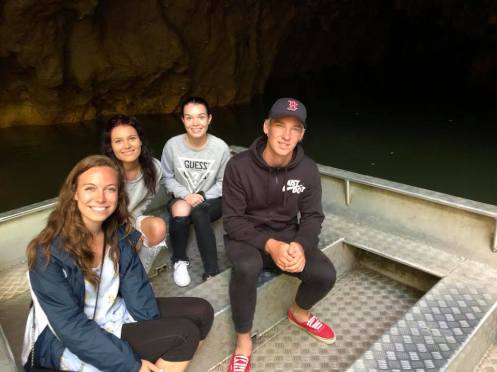 On the boat with Rose, Katie, and Madison for our second cave, the Glowworm Cave; in this one we weren’t allowed to use our phones or any light sources so that we wouldn’t disturb the glowworms

The night sky is one of my absolute favorite things in the world. I love the immensity of it and the resulting small feeling that comes from it, even though dwelling on our smallness scares some people. I love imagining a great big God who created it all, thinking of the delight it would bring to those tiny, tiny beings down on earth.

I felt that same sense of awe as I took in the sights of the cave.

The Ruakuri Cave – notable for it’s large cavernous spaces, this is the first cave that we ventured through

We were at the famous Waitomo glowworm caves for the day, located on the North Island of New Zealand. I was so excited for this day because I had seen photos of the notorious glowworms online and had never had the opportunity to explore the underground world of caves before.

I discovered from one of our knowledgable tour guides that these “worms” are hardly no more than maggots. How crazy is that? They glow throughout most of their short lifespan during both the larvae and adult stage. They form these dangling strings made from their own waste that act similar to a spider’s web, catching flying insects for them to live off, and use their glowing bodies to attract their prey to them in the darkness of the caves. Glowworms can exist only in the caves that contain some source of water, as the water is what attracts the insects that sustain them. The specific nature of their design fascinates me – God didn’t leave out a single detail when planning how our ecosystem would maintain an equilibrium that allows our world to be preserved and flourish. I just love that. 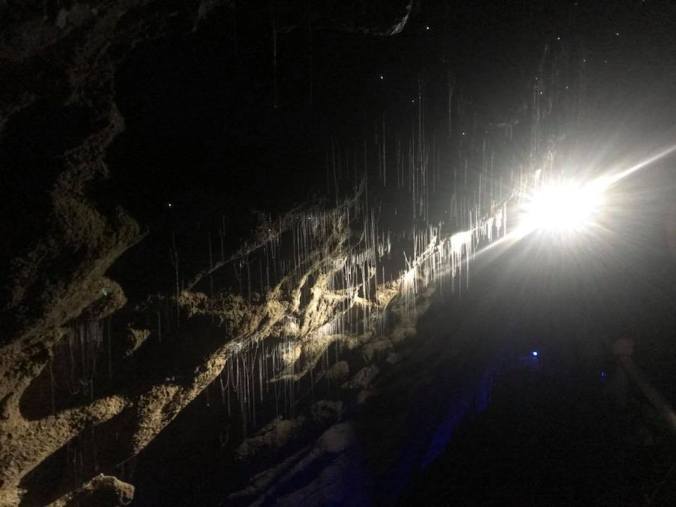 A snapshot of the glowworms in the light; in this photo you are able to see the strings that dangle from their bodies & captures their prey 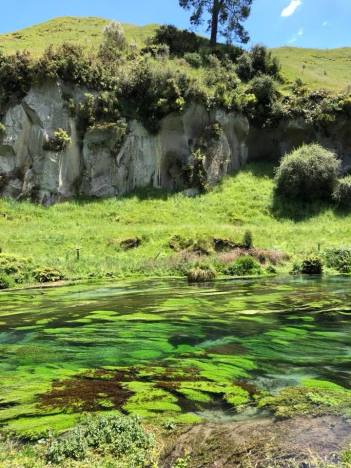 New Zealand as a whole is a cornucopia of natural beauty. In the days since I last posted, we also explored the Putaruru blue springs, which is a 10 kilometer bushwalk through local farmland. The river that runs through this property is some of the purest water you’ll find and, according to Rose, supplies about 70% of New Zealand’s bottled water. You can see straight to the bottom of the riverbank and make out every little pebble, fish, and underwater plant to be found. The blue springs at the end of the walk was a deep turquoise color; for any fans of the Nickelodeon show H2O, the tiny alcove was reminiscent of the magic water pool on Mako Island. 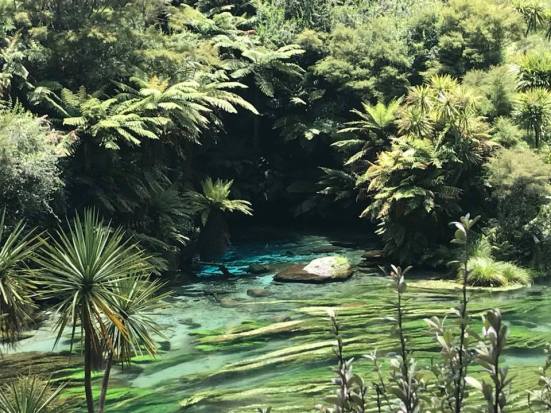 A zoomed in shot of the blue springs in the tiny alcove across the river; the whole area was the deep turquoise color that you can semi-see in this photo

While we didn’t visit the Hobbiton during our holiday, the rolling hills and wild flowers on the Putaruru walk felt quite similar to the scenes from the movies. I definitely think this was my favorite experience of the whole trip – the beauty and serenity of this place was unparalleled to any other. 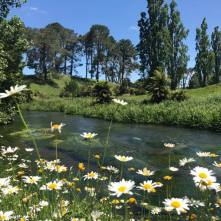 We also traveled to Taupo, a touristy city based around the crater of a dormant volcano. Over thousands of years, this crater has accumulated rain water that has formed a lake that fills it entirely, and the city was built right up to the volcano’s edge. While directly in the city we played Hole-in-One, a water golf activity where you get a bucket of golf balls and try to land one on the platform in the water to win $10,000. Of course I was nowhere close to winning, as I am traditionally more of a mini-golfer. Madison gave them a run for their money, though, and almost snagged the top prize which he then planned to split evenly with all of us 😉 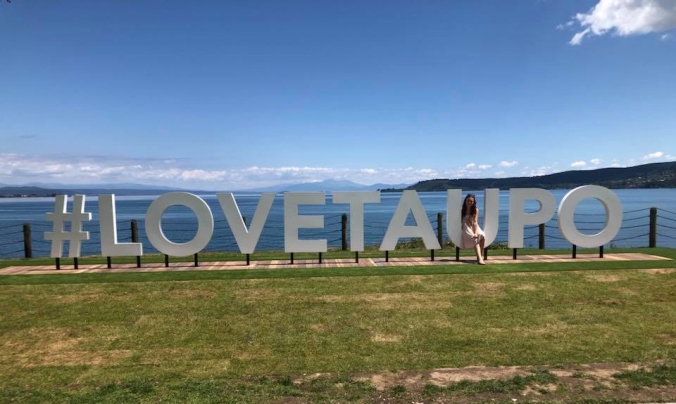 Another big reason we were drawn to the Taupo area was to take in Huka Falls and to swim in the Taupo hot springs further upstream. This was another favorite of mine – I

Rose and me at the hot springs

am such a sucker for all things natural. The water in the springs was crystal clear and is kept hot from volcanic activity. If you venture out toward the Waikato River from the springs area, however, you are hit with a rush of ice cold water that takes your breath away. This river, should you get taken with the current, would eventually deposit you on the other side of Huka Falls – not recommended if you enjoy living. Huka Falls is immense and intense; the rush of the water is so strong that the few who attempt to take on the rapids typically do not make it. But it is the immensity of it all that makes it so impressive and draws tourists from around the world to take in its beauty. 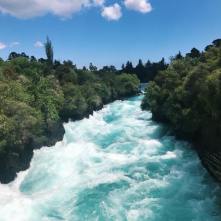 The water rushing under the bridge to the main falls area 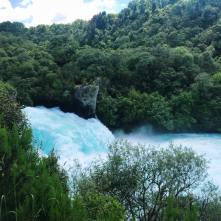 Finally, our last big stop of the trip was Rotorua. This city is known for its smell. Nope, I’m not talking about the smell of daisies and daffodils; the scent that infiltrates every nook and cranny is that of rotten eggs, a resulting effect of the sulfur that is given off from the amount of geothermal activity in the area. Rotorua is situated right within the Pacific Rim of Fire, and it makes the area an ideal place to enjoy more hot springs and see geysers. We went to the Polynesian Spa, a collection of hot pools that have a great view looking out over the lake. It was a relaxing way to spend the afternoon. 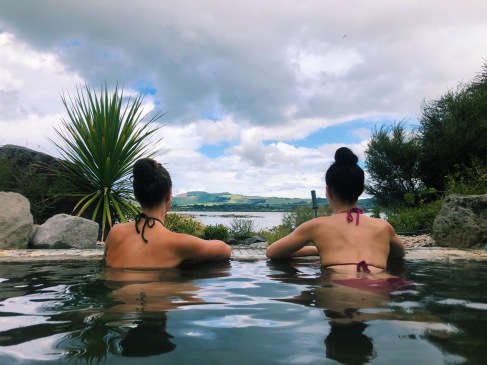 We rounded out that trip with a cultural experience – a night learning about the richness of Māori life. The Māoris are the native people of New Zealand, and their influence is still

found woven throughout the culture of the land. Even the names of cities and landmarks are originally in Te Reo, the Māori’s native language. So in the hopes of digging into the culture and understanding its roots, Rose arranged for us to visit the “village” of Tamaki. This village was set up to encourage tourists and locals to understand the customs of the Māori people and to allow them to partake in a traditional hangi dinner (hangi being a Te Reo term to describe when dinner is cooked in underground ovens). The group of tourists was split into different “tribes” and led around the village, learning about the meaning of their facial tattoos and traditional tribal greetings and dances.

Flashing forward, we have now been back in Australia for around a week, so I am a little behind in wrapping this post up (whoops! soz fam – I was too busy actually out there living my life to finish before now). All in all, our time in New Zealand was one for the books. There is still so much left of this beautiful country to explore (South Island, I’m coming for you next!), but the moments we spent adventuring and just doing life were truly what great memories are made of. I am so grateful for this world and for the opportunity to explore it! Shout out to the “flatmates,” Rose and Greg, who allowed a wandering American woman to live in their home for a month. You guys are great and the very picture of Christlike hospitality (not to mention that we worked out the one-bathroom-for-five-people situation astoundingly well! As Katie would say, love that for us 😉 ).

Kia ora, Aotearoa. I am sure I will see you again one day.

Now on to the rest of my holiday, the remainder to be spent in my favorite place: Brissy! I am so keen for some summer sunshine after a year of snow and rain back home.